O God, you make us glad by the yearly festival of the birth of your only Son Jesus Christ: Grant that we, who joyfully receive him as our Redeemer, may with sure confidence behold him when he comes to be our Judge; who lives and reigns with you and the Holy Spirit, one God, now and for ever. Amen.

O God, you have caused this holy night to shine with the brightness of the true Light: Grant that we, who have known the mystery of that Light on earth, may also enjoy him perfectly in heaven; where with you and the Holy Spirit he lives and reigns, one God, in glory everlasting. Amen.

Almighty God, you have given your only-begotten Son to take our nature upon him, and to be born [this day] of a pure virgin: Grant that we, who have been born again and made your children by adoption and grace, may daily be renewed by your Holy Spirit; through our Lord Jesus Christ, to whom with you and the same Spirit be honor and glory, now and for ever. Amen. 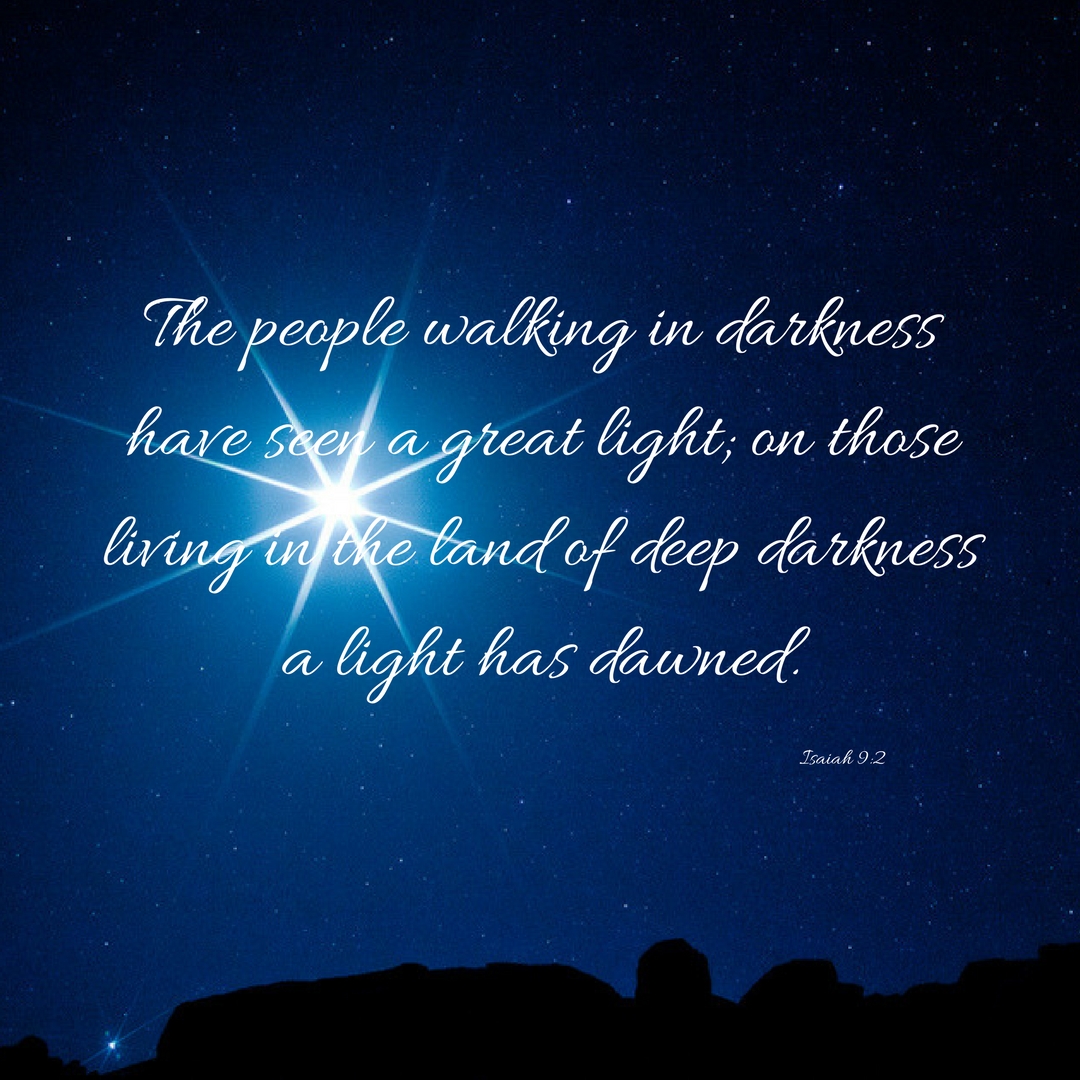 The people who walked in darkness
have seen a great light;

those who lived in a land of deep darkness--
on them light has shined.

You have multiplied the nation,
you have increased its joy;

they rejoice before you
as with joy at the harvest,
as people exult when dividing plunder.

For the yoke of their burden,
and the bar across their shoulders,
the rod of their oppressor,
you have broken as on the day of Midian.

For all the boots of the tramping warriors
and all the garments rolled in blood
shall be burned as fuel for the fire.

For a child has been born for us,
a son given to us;

authority rests upon his shoulders;
and he is named

His authority shall grow continually,
and there shall be endless peace

for the throne of David and his kingdom.
He will establish and uphold it

with justice and with righteousness
from this time onward and forevermore.

The zeal of the Lord of hosts will do this.

2 Sing to the Lord and bless his Name; *
proclaim the good news of his salvation from day to day.

3 Declare his glory among the nations *
and his wonders among all peoples.

4 For great is the Lord and greatly to be praised; *
he is more to be feared than all gods.

5 As for all the gods of the nations, they are but idols; *
but it is the Lord who made the heavens.

6 Oh, the majesty and magnificence of his presence! *
Oh, the power and the splendor of his sanctuary!

8 Ascribe to the Lord the honor due his Name; *
bring offerings and come into his courts.

9 Worship the Lord in the beauty of holiness; *
let the whole earth tremble before him.

10 Tell it out among the nations: "The Lord is King! *
he has made the world so firm that it cannot be moved;
he will judge the peoples with equity."

12 Then shall all the trees of the wood shout for joy
before the Lord when he comes, *
when he comes to judge the earth.

13 He will judge the world with righteousness *
and the peoples with his truth.

For the grace of God has appeared, bringing salvation to all, training us to renounce impiety and worldly passions, and in the present age to live lives that are self-controlled, upright, and godly, while we wait for the blessed hope and the manifestation of the glory of our great God and Savior, Jesus Christ. He it is who gave himself for us that he might redeem us from all iniquity and purify for himself a people of his own who are zealous for good deeds.

In those days a decree went out from Emperor Augustus that all the world should be registered. This was the first registration and was taken while Quirinius was governor of Syria. All went to their own towns to be registered. Joseph also went from the town of Nazareth in Galilee to Judea, to the city of David called Bethlehem, because he was descended from the house and family of David. He went to be registered with Mary, to whom he was engaged and who was expecting a child. While they were there, the time came for her to deliver her child. And she gave birth to her firstborn son and wrapped him in bands of cloth, and laid him in a manger, because there was no place for them in the inn.

In that region there were shepherds living in the fields, keeping watch over their flock by night. Then an angel of the Lord stood before them, and the glory of the Lord shone around them, and they were terrified. But the angel said to them, "Do not be afraid; for see-- I am bringing you good news of great joy for all the people: to you is born this day in the city of David a Savior, who is the Messiah, the Lord. This will be a sign for you: you will find a child wrapped in bands of cloth and lying in a manger." And suddenly there was with the angel a multitude of the heavenly host, praising God and saying,

"Glory to God in the highest heaven,
and on earth peace among those whom he favors!"

[When the angels had left them and gone into heaven, the shepherds said to one another, "Let us go now to Bethlehem and see this thing that has taken place, which the Lord has made known to us." So they went with haste and found Mary and Joseph, and the child lying in the manger. When they saw this, they made known what had been told them about this child; and all who heard it were amazed at what the shepherds told them. But Mary treasured all these words and pondered them in her heart. The shepherds returned, glorifying and praising God for all they had heard and seen, as it had been told them.]